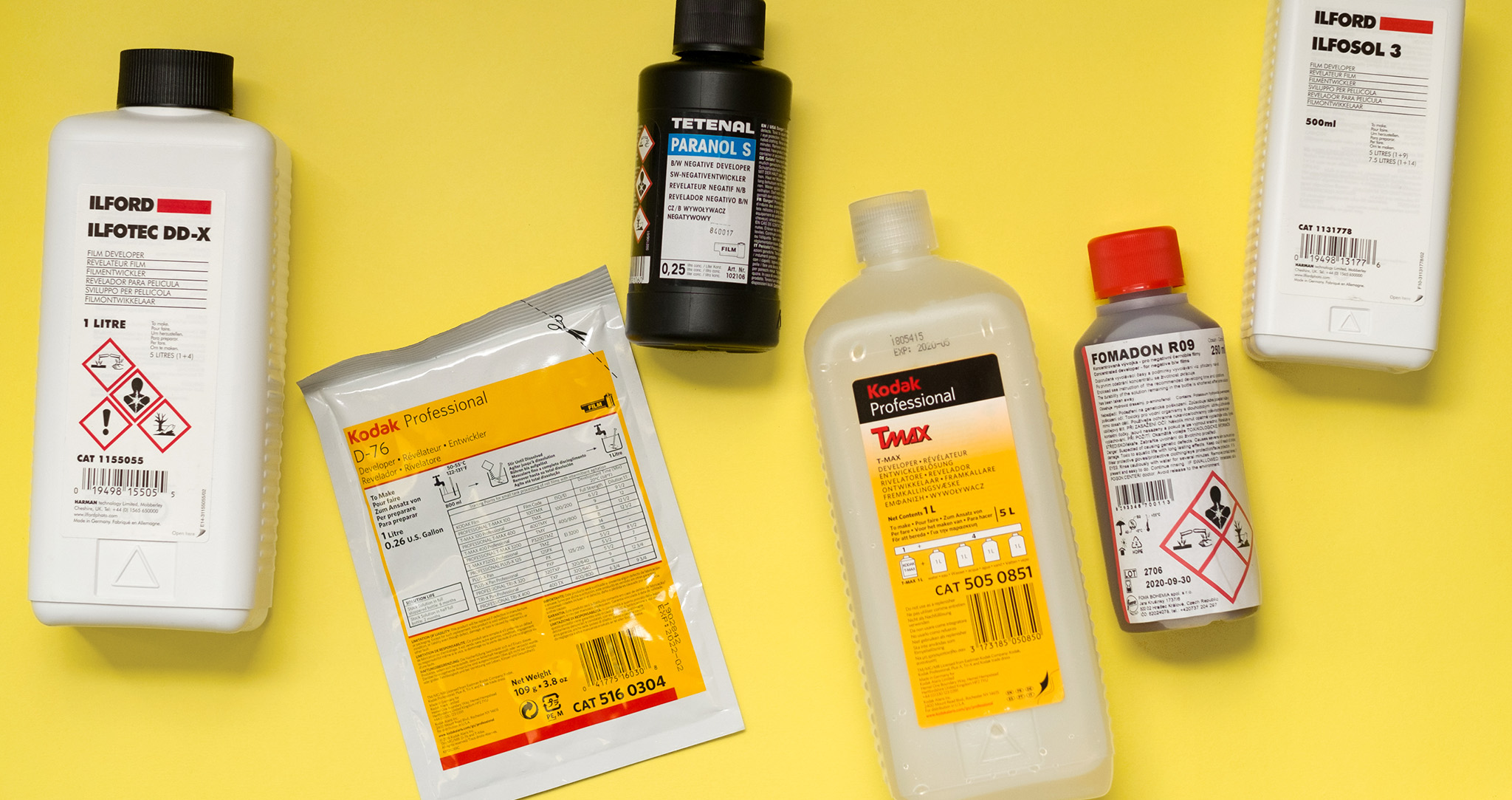 This guide will talk you through the various options you have when you choose your film developer for black and white film. So, read our guide to film developers and see which one is right for you.

Film developer is the most important of the four chemicals you need to develop black and white film. This is the one that will determine the look of your negatives. The other chemicals are stop bath, fixer and wetting agent. You can find a list of everything you need on our post: Develop Film At Home. But, right now, we are going to focus on the different options you have when you come to choose your film developer.

Film grain is made up of very tiny crystals of light-sensitive silver salt. When developed they turn into black grains of metallic silver. Slower films have finer grain and faster films have coarser grain. This grain can be visible once the film is developed and contributes to that “film” look.

The developer you choose will determine the sharpness and size of the grain, as well as the range of tones you will get. Developers can be broken down into several overlapping groups. Powder or liquid, high or low dilution, fine grain or sharpness.

High Acutance developers will give you larger and more pronounced grain. They are also known as non-solvent developers. Because there is no solvent, the contrast between light and dark areas is strong, making the edge of the grain appear sharper. This edge contrast is called acutance. Thus, your images will appear sharp, but with more noticeable grain. High acutance developers are generally one-shot and high dilution.

It’s worth a mention that a fine grain developer will become high acutance at higher dilutions. This is because the increase in water dilutes the solvent properties in the developer. So, for example, Kodak HC-110 will give you increased sharpness, and more noticeable grain, at the higher dilutions.

High dilution developers are those that use a smaller amount of developer in relation to the water. A good example is Fomadon R09, which has a ratio of 1+25 or 1+50. These developers are high concentration and have a longer shelf life.

Low dilution developers use a higher ratio of developer to water. For example, Ilford DD-X is mixed up at a ration of 1+4. Powder developers have low dilutions, often 1+1 to make a working solution from stock.

Classic developers are ones that have been around for decades and used by some the greats. Their formulas haven’t been changed in years. They work really well with classic black and white film emulsions, like Kodak Tri-X, Ilford HP5, FP4 and Pan F, and the Fomapan films. These developers include Kodak D76, Kodak HC-110, Ilford ID-11, and, one of the oldest of them all, Rodinal (Paranol S, R09).

Modern developers were created with the introduction of T-Grain emulsion films. They are the Kodak T-Max range and the Ilford Delta range. These films have a different grain structure than traditional films, with a more even and consistent grain. The modern developers bring the most out of the T-Grain films. These developers include Ilford DD-X, Kodak T-Max, and Tetenal Ultrafin T-Plus.

There are no hard and fast rules. You can get good results with any of these developers, and any combination of film.

There is no magic formula to choosing the right developer, it will depend on the look you are after. If you are shooting lots of different speed films, something like HC-110 or Ilford ID-11 are good versatile developers. If you always shoot one film, it may be worth experimenting to find that perfect look.

There are some extra things you can consider when you choose your film developer. Such as when shooting with older lenses, you will get a softer image so a high acutance developer will give your images a sharper look. Conversely, a fine grain developer will bring out the most detail when using a more modern coated lens.

Read our guide How To Prepare Film Developer to learn more about how to get your developer ready for film processing.