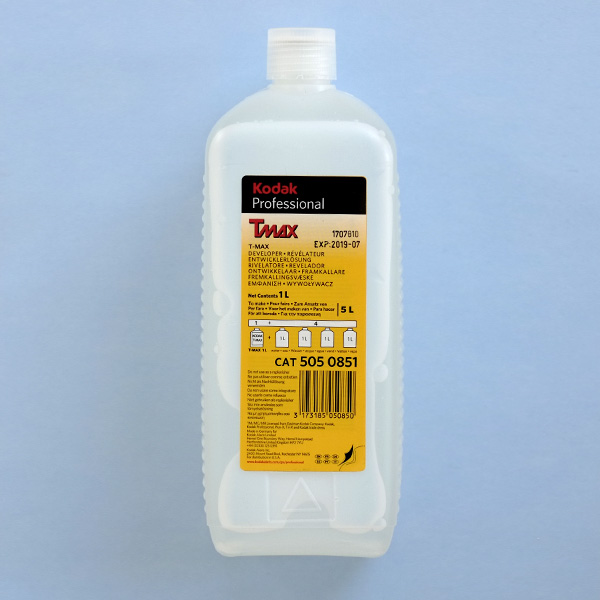 Kodak T-Max Film Developer is a liquid concentrate black and white film developer. Ideal for processing T-Grain films such as Ilford Delta or Kodak T Max. You will get a good balance of fine grain, sharpness, and tones. It will give you particularly good shadow detail.

Kodak T-Max Film Developer is a liquid concentrate black and white film developer. You will get a good balance of fine grain, sharpness, and tones. It will give you particularly good shadow detail.

Ideal for processing T-Grain films such as Ilford Delta or Kodak T Max. Kodak T-Max Film Developer has been specially designed to get the most out of these modern films. Additionally, it will also work well with a wide range of black and white films.

This bottle will effectively give you 5L of working solution developer. You can easily mix smaller volumes by mixing one part of the concentrate with four parts water.

T-Max Film Developer is not a one-shot developer. Simply reuse the working solution until exhausted. You can prepare your working solution in advance, so there is no need to mix up developer each time. Store in a tightly capped bottle until needed for use.

As it is a concentrate, you dilute it to make a working solution. To prepare Kodak T-Max Film Developer, dilute 1+4. That means one part developer to four parts water. Make sure you mix together thoroughly before use.