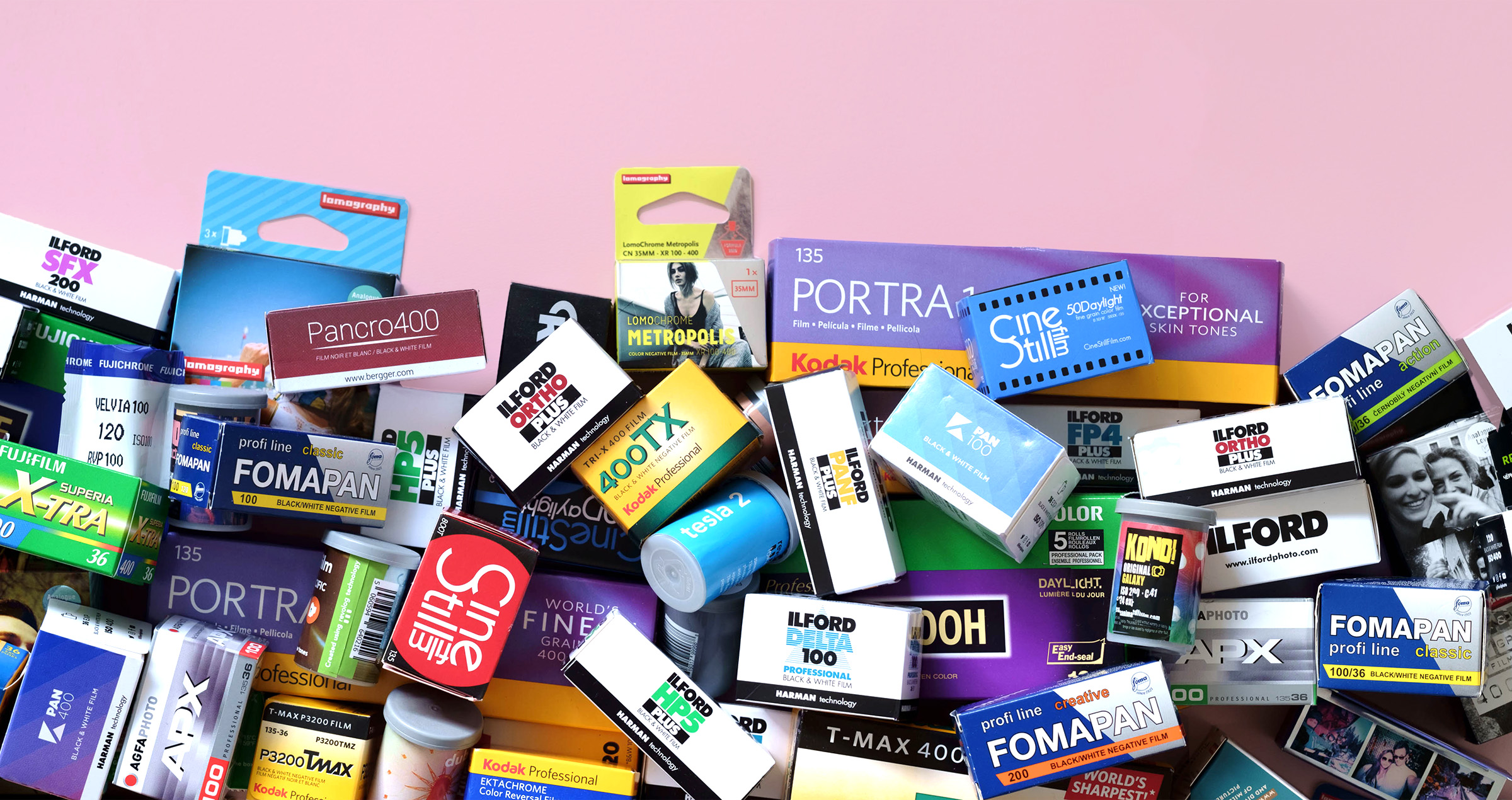 This guide will talk you through the various options you have when you choose which film to shoot. So, read our guide to choosing the best film for you.

Have you just got hold of a film camera and not sure where to start. We have lots of camera films to choose from, but you might be wondering which is the best 35mm film for beginners? Or which is the best one for you? You’ll have to decide whether you want colour or black and white. And, of course, which format you need. You can find out more in our Guide To Film Formats. To help you decide which film would be the best film to load into your camera, we’ve broken them all down into sections. So, have a read, and choose your film.

Please keep in mind, particularly due to Covid, not all of the films are always available from the suppliers. We hope there’s enough information here to help you pick the next best choice if a film you’re after is out of stock.

These budget films are good ones to get started with. If you’ve never shot film before, we recommend one of these affordable rolls to put in your camera. Cheaper films free you up to make mistakes and experiment. So, we’d choose these as the best films for beginners.

In colour, you’ve got Kodak Colorplus and Fuji C200. Both are 200 ISO and the cheapest colour film we stock. Colorplus will give you softer, warmer colours. While C200 will give you a bit more contrast, with a slightly cooler look. We have done Film Reviews of both, you can check out Colorplus 200 and C200 to get an idea of how they look. These two films are only available in 35mm.

Our budget black and white is covered by Kentmere, a cheaper brand made by Ilford, and Fomapan from the Czech Republic. Like the cheaper colour films, Kentmere is only available in 35mm. But you can try out Fomapan in 35mm, 120 and large format. It is a particularly good one to shoot in 4×5 when you’re getting to know your camera.

Best film for beginners or film shooters on a budget.

These are films you’ll want to use when you feel more comfortable with your camera. They are a step up from the budget range, but not into professional territory. Having said that, they are more than good enough to use professionally, once you know the look you’re after.

Three great popular colour films are Fuji Superia, Kodak Gold and Kodak Ultramax. Fuji Superia 400 will give you good contrast and saturation with some noticeable grain. At 400 ISO it is a flexible speed to cover most situations, from sunny days to overcast evenings. Kodak Gold 200 is slower and has finer grain, as well as warmer colours. Kodak Ultramax 400 is faster than gold, with more grain, and a more neutral tone.

We would also include Lomography Colour 100 and 400 in this category. They have the advantage of being available in both 35mm and 120, so you can get a consistent look across both formats. They come in three packs and are reasonably priced.

Again, 200 and 400 speed films are good all-rounders. Alongside Fomapan 400, which we mentioned in Budget Films, we would recommend Ilford HP5 Plus 400 and Kodak Tri-X 400. These are two black and white classics. You can read more about them below.

The two most classic films we sell are Ilford HP5 and Kodak Tri-X. Two black and white 400 ISO films that haven’t changed much over the decades. If you want to capture that classic grainy black and white look, go for one of these two. Not sure which one to go for? HP5 has a smoother range of tones, whilst Tri-X is more gritty and contrasty.

Also worth considering is Ilford FP4 Plus 125, sometimes overlooked next to the faster HP5, it has great contrast and tones. Plus you get a smooth fine grain.

Best film for street photography, but great in every situation, really.

Undoubtedly, the professionals choice when it comes to film is Kodak Portra. You can pick it up in 160, 400 or 800 speed, with 400 easily the most popular. You get fine grain, soft neutral colours and reliability. They give you really good skin tones, so definitely the best film for shooting portraits (it’s in the name!).

There are a couple of other pro Kodak films to check out, Ektar and Pro Image 100. With Kodak Ektar you’ll get bright saturated colours and excellent contrast. Kodak Pro Image 100 has more muted, neutral colours and is only available in 35mm.

Both Ilford and Kodak developed a more modern emulsion called T-Grain in the late 1980s. The T is for tabular, which means the silver halides are flatter. This leads to a more even grain and smoother gradation of mid-tones. Kodak has the T-Max range, which comes in 100, 400 and 3200 speeds. Ilford has the Delta range, also in 100, 400 and 3200. If you’re looking for extra detail, all these films are a good choice. As with HP5 and Tri-X, Delta is a bit smoother, and T-Max has more contrast. There isn’t quite as much latitude with these films, so keep an eye on your exposures.

If you’re shooting in low light, or need fast shutter speeds you’ll want a high-speed film. You can find out more about how your film speed affects your overall exposure in our Guide To Film Speed.

If you want to capture low light in colour you have a few options. First off is Portra 800, it has similar qualities to the 160 and 400 versions, fine grain and soft, neutral colours. Next up is Lomography 800, a more affordable choice, with a bit more saturation and grain than Portra. Finally, for a different look, you have Cinestill 800T. Cinestill is a converted movie film and balanced for tungsten lighting. This is the film you need if you’re shooting neon signs or gas stations at night.

Low light in black and white? You’ve got two choices, Kodak T-Max 3200 and Ilford Delta 3200. Both will give you excellent results when you haven’t got a lot of light, or want to capture action shots. Considering the high speed both films have impressive grain.

Of course, you don’t need to use a fast film, you can always push your film to a higher speed than “box speed”. To find out more about pushing film read our Guide To Pushing And Pulling Film.

Alongside the black and white T-Grain films, you have a few options when you want as little grain as possible.

There is Fuji Acros II in black and white, a film they recently brought back into production. Very fine grain and nice, crisp contrast. Ilford has two great options when you want that fine grain, Ortho Plus 80 and Pan F Plus 50. Both deliver smooth tones and super fine grain. Ortho is an orthochromatic film, meaning it doesn’t pick up red and orange light and has strong contrast.

Best film for landscapes, lots of detail and minimal grain.

Also known as Slide Film, Transparency Film gives you a positive, transparent image. Transparency film has very fine grain, high definition, strong contrast and bright colours. It has less latitude than colour print film, so you need to get your exposures right. Slide film is easy to scan as you don’t need to reverse the image, and you can see what the colours should look like.

Your options are between Kodak Ektachrome E100 or Fuji’s Velvia and Provia films. Both Ektachrome and Provia will give you nice, true to life colours with a good amount of contrast. Velvia is more saturated, with higher contrast, particularly the Velvia 50.

One of the most popular is Lomography’s Lomochrome Purple. It emulates the old Kodak Aerochome film, giving purple and magenta tones to your shots. Another colour option from Lomography is Lomochrome Metropolis with muted contrasty colours.

Another brand that is great for experimenting is Dubblefilm. They pre-expose their films with different colour effects. You can try an overall pink cast with Bubblegum, or a rainbow across your image with Jelly. Revolog and Kono are two other film brands that create colourful pre-exposed films. Popular choices are Revolog 600nm with a reddish or bluish look to your film, or Kono Monsoon with a clean fresh, blue look to your shots.

If you want to try out some film pre-exposed with graphic images, then check out BKIFI Film. Choose between Rainbows, Pride Hearts or a Grid. Add another fun dimension to your images!

And, don’t forget Redscale film. This is where you shoot the film through the non-emulsion side. You can buy a version from Lomography and Kono, or you can try making your own. We’ve got some easy instructions on How To Make Redscale Film.

If you want to try something different in black and white, then you should try out Washi Film. Whether Washi S, which is converted sound recording film, or Washi Z, which is a surveillance film made for aerial vegetation mapping.

Lomography have some super slow Kino films, which are cine films that they have repackaged as stills film. If you like long exposures and very fine grain, give these a go!

Or, try out Street Candy, an ATM surveillance film repurposed for 35mm shooting.

Ultimately, there is no right answer to the question “which is the best film to choose for my camera?” It’s going to be down to personal choice, what effect you’re after and your lighting conditions. We have tried to give you a brief rundown so you can understand what different options you have. This is by no means comprehensive, but we hope it gives you a good starting point and a clear idea of what the different films do. And, can help you choose the best film for you and your camera!

Make sure you have a look at all our Film Reviews. We regularly shoot and review the films we keep in stock to give you a better idea of what they all look like. Also, check out This Is How You Shoot. These are examples of how our customers shoot different emulsions.