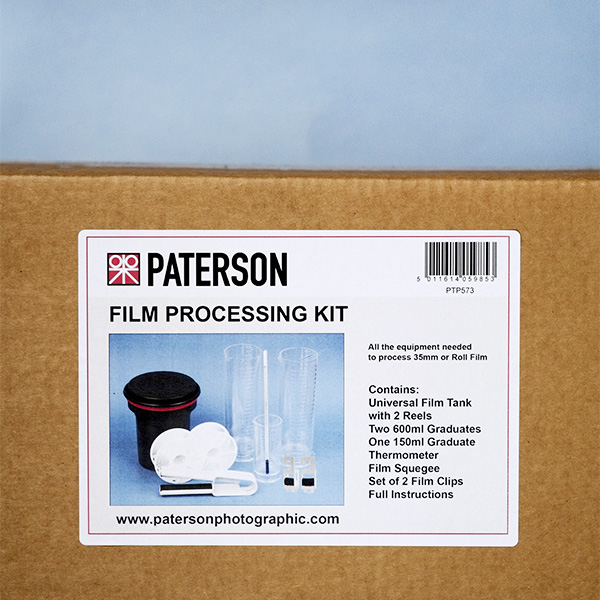 The Paterson Film Processing Kit contains all the essential equipment to process up to two rolls of 35mm or one roll of 120 film at the same time.

The Paterson Film Processing Kit contains all the essential equipment to process up to two rolls of 35mm or one roll of 120 film at the same time.

A Paterson Universal Developing Tank is included in the kit. You will find the Paterson tank is simpler to load, faster to fill and easier to clean than any other tank. It has a large diameter one-piece lid and funnel which clips into place positively and securely. Thus it will enable you to fill and empty the tank quickly. This includes two auto-load film reels, which can accommodate 35mm, 126, 127, 120 and 220 films.

To measure your chemicals, there are two 600ml graduates and one 150ml graduate. Also, a thermometer to get your developer to an accurate temperature. Alongside this, you get some film squeegees and a set of two film clips for hanging your film up to dry.

Included in the box:

Develop Your Own Film

Alternatively, the Paterson Film Processing Kit is included in our Film Processing Bundles, everything you need in one bundle. It comes with a Paterson Changing Bag, chemical storage bottles, and, with the C41 Kit, a Paterson Colour Thermometer. The full home film developing kit!

If you would like to learn more about developing your own film, you should read our guides How To Develop Black And White Film, How To Develop Colour Film and How To Develop E6 Slide Film. All the film processing guides will walk you through each step of developing film at home.